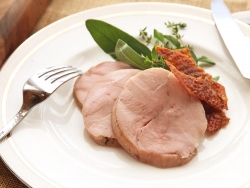 Sous-vide is a fantastic method for cooking holiday roasts. It delivers reliable moist and tender results, frees up your oven for other tasks, requires almost no supervision while cooking, and is very easy to hold hot and ready to serve until your guests are ready. That said, sous vide turkey comes with a few problems. We've solved the issues to give you a recipe that produces turkey cooked exactly how you like it, with deep roasty flavors and extra-crispy skin to boot.

Why this recipe works: