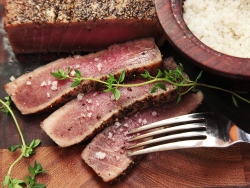 Sous vide is a great way to prepare tuna to be served nearly raw, sashimi-style, or to be used in recipes where you'd typically use canned tuna, giving you better texture and flavor than any canned option.

Rather than cold and raw in the center, you can serve tuna that's heated just to the point of starting to firm up, giving it an even meatier bite while maintaining a gorgeous, translucent deep red color and moist texture.