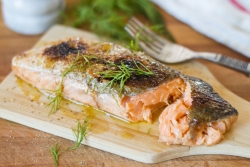 With the Anova Sous Vide Precision Cooker and a little bit of liquid smoke, you can get all the flavor of smoked fish without the dry texture. As we learned the first time we used the Anova, brining the salmon before precision cooking is the key to success for this recipe.