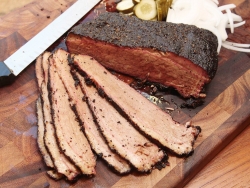 Depending on the temperature you set your water bath to and the amount of time you leave the meat in it, you can achieve a wide range of textures in the finished brisket.

At 135°F / 57°C, brisket will never achieve the fall-apart texture of a traditionally barbecued brisket. Instead, it will soften while still retaining its structure. At 12 hours it's still quite tough. At 24, it it as tender as a New York strip steak. At 36 hours, it's even more tender, and by 72 hours, you'll have brisket that you can cut with a spoon, while still giving you a meaty bite and juicy texture.

At 145°F / 63°C, the meat will just barely start to separate into a traditional brisket grain, but it will be a little dryer than at 135°F / 57ºC. This is sort of a temperature dead zone for me: too cool to significantly break down muscle fibers to the point that they shred like traditional brisket, but hot enough that the meat will dry out as it cooks.