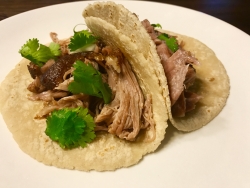 The ultimate no-fuss dinner. Drop the pork shoulder in the night before bed and the low and slow goodness of Anova turns that totally tough cut into something tender, juicy, and magical. The next night,  get home, toss it in the oven for 30-45 minutes until the exterior has a nice crust and tear into this totally-delicious dish.

Cole Wagoner developed a deep appreciation and high expectations for the quality of food during his years living in Portland, a city with some serious food game. When Cole met the girl of his dreams, he followed her across the country from his beloved home state of Oregon, to a small town in Alabama. The only thing missing seemed to be the glorious abundance of grub he’d previously enjoyed, which took a bit more of a drive to find in his new neck of the woods. So began Cole’s journey for the perfect kitchen tool companion to help him recreate food experiences from the comfort of his home, while snapping epic food photos along the way, and that journey has ultimately landed him in the Anova Kitchen where he handles all things social media for Anova.