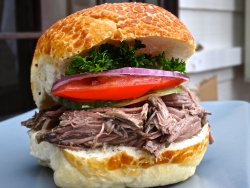 Burger buns or rolls filled with ridiculously tender beef. What's not to like?