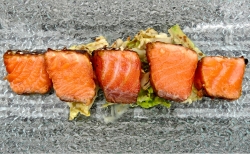 If you dislike overcooked, dry salmon, you'll absolutely love this recipe - because it's cooked perfectly every single time. The salmon is cooked at 40ºC for 30 minutes, and because it's cooked in a miso and mirin marinade, it's also packed with flavor.