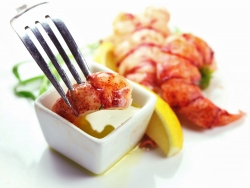 Lobster was the first meat that I ever cooked sous vide, and it's still one of my favorites. If buttery, tender, sweet poached flavor is what you're after, there's no better way to cook it. It's better than the best steamed or boiled lobster you've ever tasted. How much better? If I were in a mood for writing in hyperbolic tropes I'd tell you that it's [insert arbitrarily large number here] times better. But if I'm being honest, it's a lot better than boiled lobster, significantly better than steamed lobster, and a plain old better than roasted lobster. It's also heck of a lot more foolproof than any of those methods and also affords the opportunity to infuse that lobster meat with extra flavor. Think: lobster with the butter built right into it. Doesn't that sound swell?