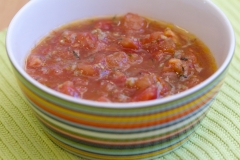 One of my first thoughts upon owning an Anova precision cooker was to see what tomatoes were like sous vide. Here is the thing: I live in Norway and Norway is not exactly known for awesome tomatoes. Fish? Yes. Tomatoes…? Not so much. Our tomatoes come in mainly one average round size, very uniform in colour and firmness. Very… average and not naturally sumptuous in flavour. Passable, you could say. My hope was that the sous vide process might be just the ticket to draw out the umani in my very practical tomatoes by gently breaking down the cell structure and allowing the aromats (in this case lots of garlic and oregano) to infuse into the tomatoes. My hopes were realized! After one hour the warm tomatoes held their shape and yet were fragrant, garlicky, tender and delicious. My children were eating it by the spoonful right from the bag but we enjoyed it on French bread as a bruschetta topping as well. These sous vide garlic tomatoes would be great tossed with penne or even white beans for a great vegetarian side dish. I am so glad that I now have a way to turn a bland, average, passable tomato into a wildly luscious and delicious treat!