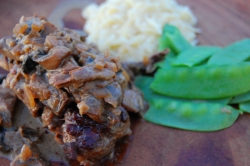 A Stroganoff recipe typically calls for cubed beef, but I couldn’t bear to cut my steaks in to cubes as they were just so nice as they were. Instead, I made the stroganoff sauce separately after I seared the steaks and placed them into the Anova Precision Cooker water bath. The result? Using the steak juices provides additional flavor, adding an extra layer of perfection to this recipe. Serve and enjoy - you'll want to create this dish again and again!

I grew up in a cooking family and after getting a degree in Spanish and Anthropology, realized what I really wanted to do was to go to culinary school. After working in a NYC bank for a few years, I managed to get to culinary school and got my first jobs in NYC kitchens, including a long stint at Union Square Cafe in its earliest years. After (sadly) leaving NYC, I realized I needed to step away from the 80-hour work weeks, so I left the heat of the kitchen for the cool of the computer keyboard: I started writing about food, the business of food, and technology in the food industry, as well as teaching cooking classes. Recipe development remains one of my top loves, and the opportunity to develop recipes for Anova has been fun every step of the way.