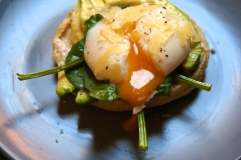 Sous vide egg with avocado, spinach and Parmesan on an English muffin. This recipe’s also fantastic if you add some smoked salmon, ham or bacon. Note: The cooking time for this recipe is very precise. If your sous vide cooker only has time increments of 10 and 15 minutes, set it for 15 minutes and wait until the timer reaches 13 minutes before putting the egg in the water bath. To cook eggs in advance, transfer the cooked eggs from the water bath immediately into an ice bath. Let cool to room temperature in the ice bath, and transfer to the refrigerator. To reheat, place eggs back in the Anova Sous Vide Precision Cooker at 60ºC for 5 minutes.