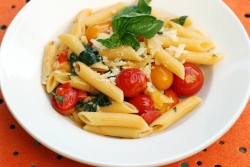 The late-great cookbook writer Marcella Hazan, credited with bringing the authentic traditions of Italian cooking to America, was beloved for many of her recipes. Chief among them was a very simple pasta sauce she often made for her family that grew to be loved the world over. It was just canned, peeled tomatoes cooked gently with an onion, a pinch of sugar and a generous amount of butter. Tossed with pasta, it is true comfort in a bowl. This is a riff on that classic recipe. Instead of canned tomatoes, I use summer’s bounty of cherry tomatoes in yellow, red and orange hues. Because they’re so tender to begin with, I don’t bother peeling them, either. And because they’re already at their peak of sweetness, I don’t add any sugar. Cooking the makings for this sauce in a precision cooker means you don’t have to stand over the stovetop, stirring frequently to make sure nothing sticks or burns. When the tomatoes are tender, I mash half of them to create a sauce that the pasta continues to cook in, absorbing that wonderful flavor. I stir in the remaining tomatoes, leaving them whole, so that they burst with juice in every mouthful. The onion is there just to flavor the tomato sauce, not to serve. Hazan has you discard it. But I think it’s still plenty flavorful enough to use the next day, if you like, diced into scrambled eggs or sautéed with spinach or kale. This pasta dish puts the spotlight right where it belongs – on wondrous summer tomatoes, whose natural sweetness gets concentrated in the cooking and accentuated even more by the butter. The flavor is reminiscent of Margherita pizza. It’s a perfect dish for Meatless Mondays. Or for that matter, any day of the week.

Carolyn Jung is a James Beard Award-winning Bay Area food journalist, whose work has appeared in the San Francisco Chronicle, Every Day with Rachael Ray, Coastal Living, Via magazine, Food Arts, Edible Silicon Valley, Wine Spectator and other publications. She is the former staff food writer for the San Jose Mercury News. Her debut cookbook "San Francisco Chef's Table'' published in December 2013. She is also the creator of the acclaimed blog, FoodGal.com.