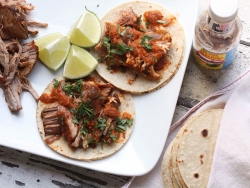 With sous vide, there's also no real chance of overcooking. With a slow-cooking, extra-forgiving cut like pork shoulder, which is high in both connective tissue and fat, even if you overshoot by half a day your end results are going to still be incredible. I know: I tested it to find out! The other great thing about cooking sous vide is that because the pork is sealed inside a bag, there's no need to add any additional fat whatsoever. The fat rendering off the pork shoulder as it cooks gets distributed around the bag, essentially allowing the pork to tenderize in its own juices. The results? Extra-moist carnitas time after time.