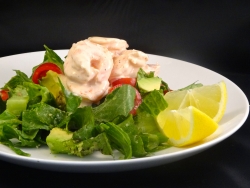 Prawn cocktail doesn't have to be banished to the land of the passé - this recipe uses the fundamentals and makes a salad that doesn't look an ounce 70s-esque. The prawns are perfectly cooked sous vide and are tossed in the traditional prawn cocktail dipping sauce, and then served atop a healthy salad.