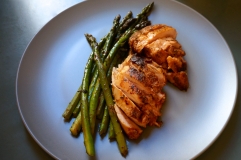 Chicken, like fish, is quite delicate when it comes to sous vide cooking – but with the correct time and temperature, this delicate meat comes out juicy and tender. And the addition of cajun spices makes this dish full of flavour. In this recipe we’ve used chicken thighs for extra moistness and served it with some herb-loaded asparagus.