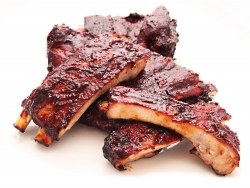 Ribs are traditionally slow-cooked in a smoker in order to get their copious amounts of connective tissue to convert to gelatin, turning the tough ribs tender. The rate at which this conversion takes place is a function of temperature and time; The lower the temperature, the longer it takes. At the same time, the lower the temperature, the more internal moisture the ribs will retain as they cook. So while a rib cooked at 145°F / 63°C will take about three times longer to tenderize than those cooked at 165°F / 74°C, they will end up with a more succulent, meaty texture that eats almost like an extra-tender steak. Ribs cooked at a higher temperature will have a more traditional bbq rib texture with well-rendered fat and meat that shreds as you eat it.

Note: Barbecue sauce can also be omitted if you prefer a dry-style rib. For dry-style ribs, re-rub ribs with reserved 3 tbsp / 45 ml of dry rub after removing them from the vacuum bags in Step 13 and omit saucing steps when ribs are in the oven or on the grill.